A new cadre of freshmen have begun college haunted by a looming statistical trend: More than 40% of those who have ADHD are destined to fail their first semester. And after this initial failure, only a relative few will attempt another semester, and even fewer will complete college.

These aren’t marginal students who’ve managed to slip through the college vetting process. In fact, they are intelligent, motivated students scrutinized by rigorous standards of entrance exams scores, grade point averages, extracurricular activities, as well as their ability to convey these accomplishments in essay and interviews.

So what causes these students – who give every indication they are bound for success – to fail? What are the common denominators of their failure? And, most importantly, what can be done to redirect them toward success?

Typically, these students lack life skills that weren’t fully developed in high school or have not yet transferred into the less structured and more challenging setting of college. Executive functions and emotional intelligence top the list of greatest deficits.

Learning to organize themselves to function independently, perhaps for the first time in their lives, can prove problematic in the chaos of developmental, emotional, psychological, and social change while also struggling to adjust to a completely different education system.

This chaos is only exacerbated when they leave home with untreated issues like anxiety, depression, gaming addiction, or substance abuse. College becomes little more than a newer, less structured, and even freer environment for these difficulties to fester even further. For those undiagnosed, ADHD makes its first appearance as they enter an environment that requires more effort and sustained focus…a place where simply relying on native intelligence is not enough.

Burdened by this lack of skills and resources, students often find themselves alone in an uphill struggle to succeed in the current semester, while also learning the important “how to do it” lessons that will enable them to succeed in future semesters. College rarely offers ADHD students a template or model to
hit the ground running so that they can learn and grow from the inevitable mistakes they make due to these deficits. Yet those who fail the first semester – as well as those who pass by the skin of their teeth – are more likely to keep trying and improve when they have a such a model.

Beyond off the shelf ideas like going to office hours, using a calendar/planner, asking for help, using their accommodations, students need a structure that will empower them to better organize themselves around the deficits that accompanied them to college and to experience struggle (and even occasional failure) as an integral and useful part of the learning process.

A few principles need to guide this structure:

Here’s what this model looks like when taken from theory into practice: 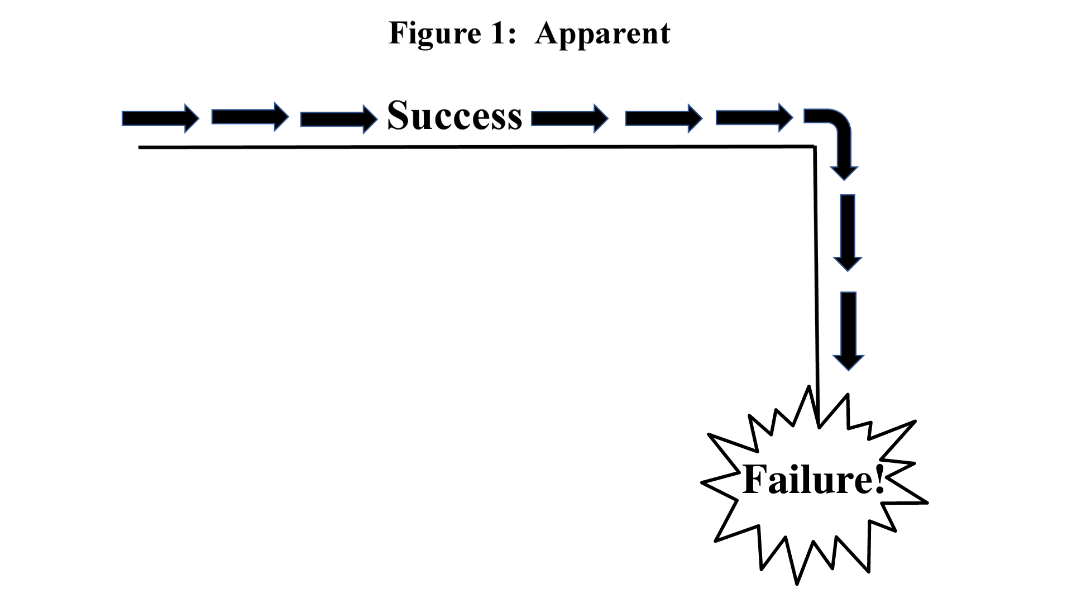 From the outside looking in, failure emerges – seemingly out of nowhere – near the end of the semester, where students and parents are equally startled by its abrupt appearance. By outward indications, it may have seemed as though the student had been doing well up to that point. (Fig.1) 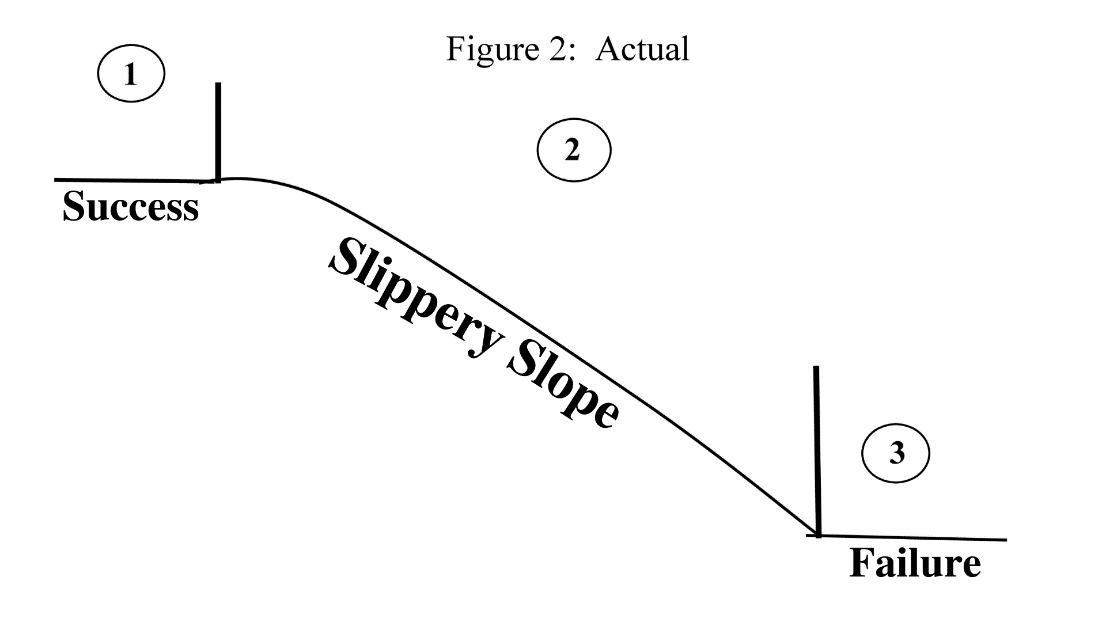 But seen from the inside of the process, the real picture of failure is more like figure 2, where indications of failure were evident (but unobserved) early in the semester. And the process of moving from success (zone 1), down the slippery slope (zone 2) continued uninterrupted until failure was a logical conclusion (Zone 3).

Let’s take a closer look at the zones. 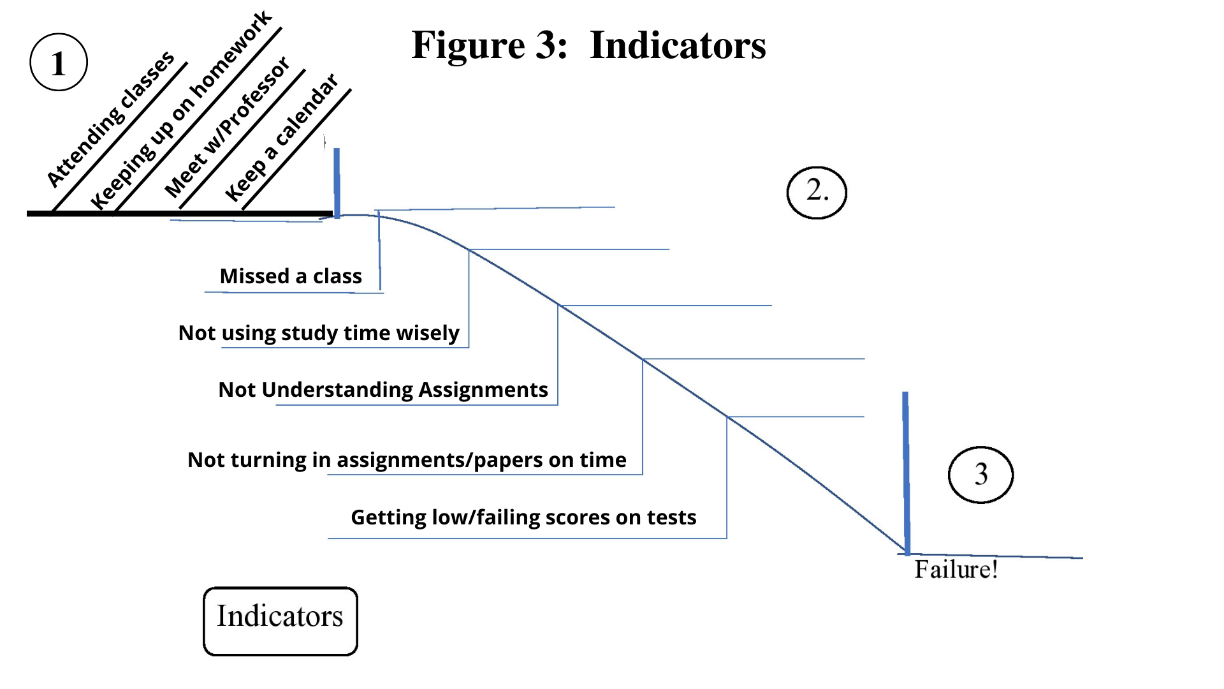 © Copyright 2019, Dr. Jon L. Thomas, all rights reserved
Students typically begin the semester in Zone 1 where they are practicing successful behaviors and getting successful results – like regularly attending class, timely completion of assignments, and balancing academic and personal life. As Figure 3 illustrates, the drift into Zone 2 is evidenced by subtle to increasingly evident and intensifying indicators. For example, an occasional missed class, poor preparation/performance on a test, increasingly becomes the norm of infrequent attendance, never preparing for, and consistently failing tests. In lieu of productive work, students fill their life with socialization, gaming, or other means of coping with the resulting anxiety and depression. Zone 3 is the point at which no action can reverse the slide to failure. Here students are left to either withdraw (if not too late), quit, or outright fail. 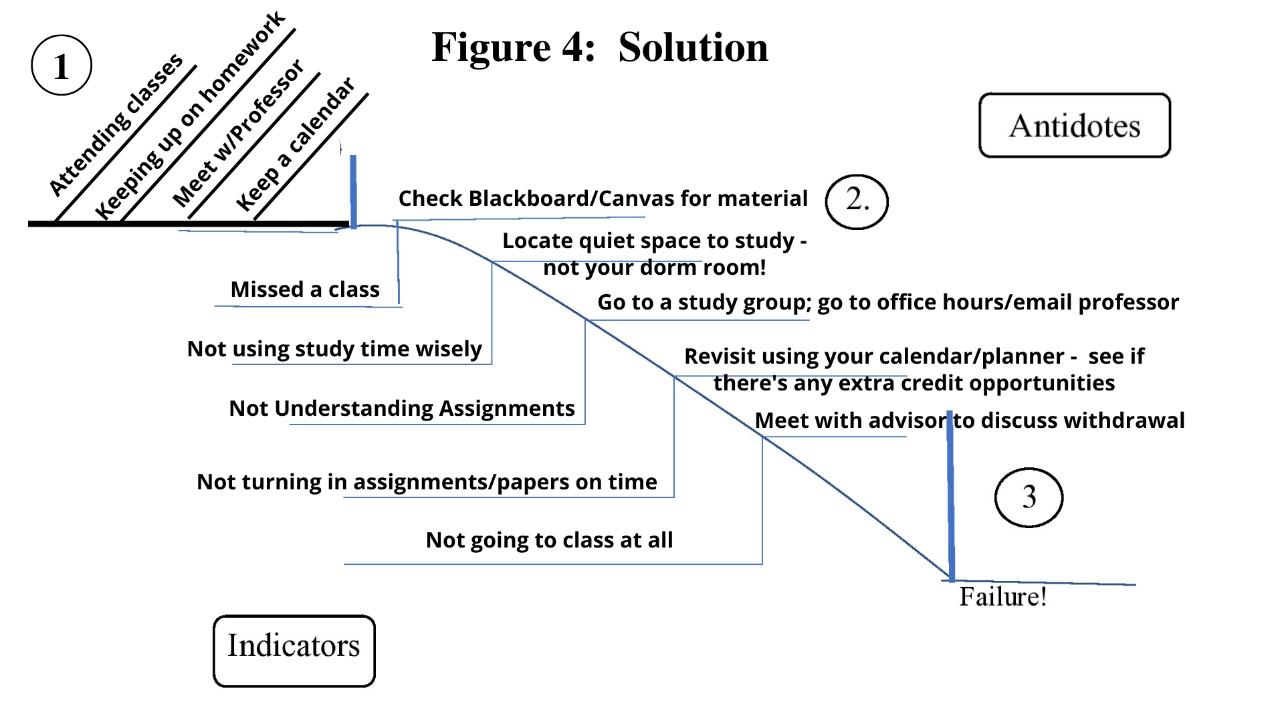 © Copyright 2019, Dr. Jon L. Thomas, all rights reserved
Figure 4 illustrates some possible antidotes to typical indicators of slide toward failure. Because both the indicators and antidote behaviors are subjective and personal, the individual self-reflective work of discovering these patterns and solutions requires endeavor unique to each student and typically leads to discoveries in areas like motivation, organization, and self-advocacy.

For each indicator, a student can devise an antidote behavior that will get them back on track for success. However, as Figure 4 demonstrates, the further down the slippery slope of Zone 2 the student slides, the more intense and complex the antidote behavior required to restore to successful behavior. And as they move further down the slope, they face increasing levels of stress, anxiety, and depression in addition to the burgeoning load of unfinished work. The resulting downward momentum contributes to the rapid onset of irreversible failure and the shock accompanying this awareness.

The model presented here, and its accompanying terminology offers a unique language to express the subjective nature of this experience and provides a structure for plugging into the process. For example, during academic coaching sessions, our students will check in with “Here’s where I am on the Curve” and “This is the action I will take to get back to or stay in Zone 1 (success).”

Doing the work of developing a personalized “Success Curve” before the semester begins provides students a better chance of conceptualizing, anticipating, and averting the dangers of the slippery slope of Zone 2. This charted visual of their Curve offers a functional tool for identifying, celebrating, and reinforcing successful behaviors in addition to noting and remediating actions that could lead to failure. As students become proficient in the use of this model, they find ease in applying it to other aspects of college life that need monitoring as well, such as emotional hygiene, social life, self-care, and life balance.

College success for students who have ADHD is a complex process that goes beyond simply making good grades and passing. These students require heuristic and malleable tools to develop the self-awareness and management necessary to create healthy responses to adversity. Models such as the one presented in this article offer students the opportunities they hunger for to fully encounter their limitations, challenges, and failures and mold them into tools that provide roadmaps for success in college as well as the world of work beyond.

About the Authors:
Jon Thomas, EdD, LPC is Founder and President of The ADHD College Success Guidance Program. He is a counselor, educator, writer, and author of “Thriving at the Edge of Chaos: Making ADHD a Superpower in College and Career.”

Pamela Barton is CEO of The ADHD College Success Guidance Program where she also serves as Director of Student Services and provides Academic/Life Coaching and college readiness training.

We are a uniquely integrated program of College Readiness & Success Training, Academic Coaching, Mental Health and Career Counseling for high school and college Students with ADHD.